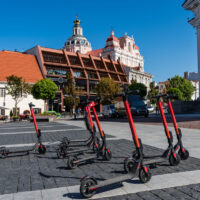 An Indianapolis woman who was seriously injured after being thrown from a motorized scooter is now suing the companies that owned and manufactured the scooter. Learn more about the incident and the woman’s claim for damages below, and contact an Indianapolis personal injury and defective product lawyer if you’ve been hurt in a scooter crash or other accident.

On June 14, 2019, Paula Speer borrowed a Lime scooter from a friend who had rented the device. She attempted to take the scooter for a ride on a quiet Indianapolis street, which she claimed was smooth and free from potholes or irregular pavement. Speer got about a hundred feet on the scooter before it lurched forward abruptly, accelerating to an unsafe speed. When she tried to apply the brakes, she was thrown forward onto the sidewalk. Speer claims that she suffered a traumatic brain injury as a result of her fall from the scooter.

Speer filed a lawsuit against Lime (known as Neutron Holdings, Inc.), as well as the companies that designed and manufactured the Lime scooters, Segway and Ninebot, for money damages related to her injuries. Speer claims that the scooter was defective in that it had a flawed design with inappropriately small wheels, a “sticking” accelerator, and a propensity to suddenly and rapidly accelerate.

Speer’s accident is far from the first serious injury to result from riding the popular electric scooters. Indianapolis hospitals have experienced a spike in electric scooter-related injuries in recent months, and in September 2018, a man riding a Bird electric scooter suffered a head injury when he was hit by a car.

If you or someone you love has been injured by a defective or dangerous product in Indiana or an Indiana motor vehicle accident, contact the Indianapolis personal injury lawyers Lee Cossell & Crowley for a free consultation at 317-631-5151.