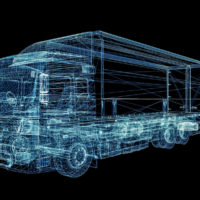 Large commercial trucks such as tractor-trailers and semi-trucks are massive vehicles, weighing many times over what an average passenger vehicle weighs. Because of their size, these vehicles can do a tremendous amount of harm when involved in a collision. While vehicle safety technology has come a long way in recent years, few of these technologies are being implemented in commercial trucking fleets. Read on to learn about the ways that collision avoidance could improve truck safety, and contact a knowledgeable Indianapolis truck accident lawyer if you’ve been hurt in a crash with an 18-wheeler.

The rate of fatalities on US roads has been climbing steadily since 2014. According to the National Highway Traffic Safety Administration, fatalities involving large trucks climbed 5.4% in 2016, totaling some 4,300 deaths. Many new vehicles offer crash avoidance or crash warning systems such as lane drift warning, automatic emergency braking, front-collision warning, and blind-spot warning systems. Accidents of all kinds could be prevented with the widespread use of these systems. The Insurance Institute for Highway Safety estimates that some 107,000 accidents could be prevented or made less dangerous if cars had collision avoidance or crash warning systems, including prevention of 30% of all large truck accidents. Safety experts point out that these systems could be especially useful in large trucks, but that few commercial truck fleets install these systems in their vehicles.

Ways that crash avoidance and warning systems could prevent accidents

For example, large trucks have massive blind spots that make it impossible to see vehicles that are traveling close behind them or almost anywhere along the passenger side of the truck. However, very few large trucks use blind spot warning systems, which would alert the truck to the presence of a small vehicle or motorcycle before they change lanes and potentially injure another driver. Large trucks are also much heavier than passenger vehicles and require up to 40% more distance to come to a stop than a car or light truck. If a truck driver fails to notice a hazard in the distance, or one appears abruptly in front of the truck, an automatic emergency braking system could prove life-saving to not only the truck driver but to the occupants of passenger vehicles nearby. Again, tractor-trailers rarely have these systems installed on their vehicles. In fact, the think tank Securing America’s Future Energy estimates that only 15% of the nation’s large commercial trucks are operating some form of collision avoidance or front-crash warning system. This organization believes that 40% of these trucks could have these systems by 2020.

If you or someone you love has been hurt in a large truck crash in Indiana, such as a big rig accident or semi-truck crash, get skilled and compassionate help seeking damages for your injuries by contacting the Indianapolis personal injury lawyers at Lee, Cossell & Crowley for a free consultation at 317-631-5151.