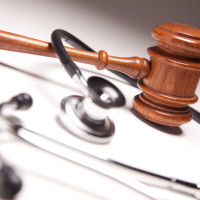 A woman who lost all four limbs because emergency room physicians failed to inform her she might have an infection that could be treated with antibiotics was awarded $25.3 million by a Milwaukee County jury. Two-thirds of that award ($16.5 million) was meant to compensate the woman for her pain and suffering and loss of companionship with her husband. The defendants immediately petitioned the court to lower that amount to $750,000, the state’s cap on noneconomic damages in medical malpractice cases.

The judge refused to do it, however. Instead, he ruled in Mayo v. Wisconsin Injured Patients and Families Compensation Fund that it would be unconstitutional to apply the state’s cap on damages in this case. The judge rejected the arguments put forth in favor of damage caps as having no rational justification in this case. For instance, it is argued that damage caps prevent outrageous verdicts from runway juries that are unnecessarily high, but the judge ruled that $15 million is not outrageous or out of proportion to this plaintiff’s injuries, and that limiting the award to $750,000 would not serve the statute’s stated purpose of providing adequate compensation to victims of medical malpractice.

As to the argument that caps are necessary to hold down insurance premiums for doctors and contain overall health care costs in the state, the judge pointed out that malpractice claims over a million dollars are paid out of a state fund set aside for the purpose. This fund is currently valued at more than one billion dollars, and the fund can easily absorb the cost of the claim out of its current year investment income without making a dent in the fund. There should therefore be no effect on physician premiums or general health care costs by paying the claim.

Indiana has had caps on damages in medical malpractice cases since 1975; in fact, we were the first state to have caps, which soon spread to California and across the county. In Indiana, the current cap is $1.25 million on all damages, economic and noneconomic, no matter how costly or severe the injury. Like Wisconsin, Indiana also has a state Patient’s Compensation Fund that pays up to a million dollars of an award, after the physician (or his or her insurer) pays the first $250,000 of the judgment. Indiana’s Medical Malpractice Act has been challenged many times on constitutional grounds but has never yet been invalidated by the courts.