What Happens if I’m in an Accident With an Unlicensed Driver? 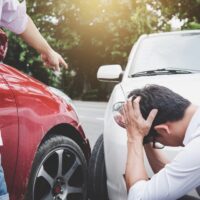 The first step after any car accident is to determine fault. The fact that the other driver was operating without a license may be evidence of negligence, but it is far from absolute. For purposes of liability, you will need to establish that that driver actually operated their vehicle negligently (texting while driving, driving drunk, ignoring traffic signals, etc.), and that their behavior led to the accident.

Recovering After an Unlicensed Driver Accident

Even if you are able to establish the other driver is at fault for the accident, you will need to find a pathway toward recovering your damages. Your options for recovery depend upon the nature of the driver.

Get Seasoned Help With Your Indianapolis Car Crash Injury Claim

If you or someone you love has been hurt in a traffic accident in Indiana, contact the seasoned and effective Indianapolis personal injury lawyers at Lee Cossell & Crowley for a free consultation on your case at 316-631-5151.

Dealing with insurance companies after an auto accident can be a headache. When you receive a payout for a totaled vehicle, the headache is only amplified after you see the check. Payouts tend to be...