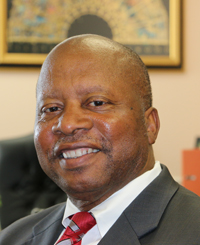 Attorney Nathaniel Lee, the Senior Partner of Lee Cossell & Crowley, LLP, is a graduate of Morehead State University, Morehead Kentucky, where he obtained his B.A. (1977) and Masters (1978) degrees. He received his J.D. from the University of Georgia, Athens (1982). He has practiced in the Indianapolis region since his bar admission and is active with various community organizations and boards.

Attorney Lee serves as Chairman of The Lee Foundation, a not-for-profit charitable organization which provides annual assistance to youth and families in the Greater Indianapolis and surrounding areas, as well as holds membership on many other community boards and projects. The Lee Foundation, chaired by Attorney Nathaniel Lee, is a non-profit organization, which provides assistance to families in the greater Indianapolis and surrounding communities. In the past, The Lee Foundation has sponsored two (2) annual events during the year: Halloween Drive-Through Candy Giveaway on Halloween Night and Christmas Adopt-A-Family during the month of December. Both events have been held for the past fifteen (15) years and have serviced thousands of families and children annually for the Halloween Candy Give-A-Way and assisted more than 2500 children and families for the Christmas Adopt-A-Family with food, clothing, toys, gifts and utility assistance during the Christmas seasons. Other assistance offered by the Foundation includes athletic sponsorships to local youth and youth groups, as well as other community assistance.

Ashabraner v. Bowers, 753 N.E. 2nd 662 (Ind. 2001). Minorities were excluded through preemptory challenges during the jury selection process involving civil cases. The Indiana Supreme Court concluded that minorities should not be excluded from the jury panel in civil cases, even if the Plaintiff is Caucasian. Ultimately the case was retried and Plaintiff received $1.2 million gross award (2006).

Nathaniel Lee has (1) tried over a dozen cases as a Trial Judge; (2) served as a Hearing Officer for the Indiana Supreme Court from 1999-2002, where he heard lawyers disciplinary cases; (3) served as Co-Chairman of the Judicial Evaluation Committee for the Indianapolis Bar Association; (4) served as Judicial Evaluation Officer for the N.A.A.C.P. Civil Rights Groups that reports to the U.S. Senate for Federal Judges Confirmation Process. Nathaniel Lee was actively involved in the confirmation process of Federal Judges for the past twenty (20) primarily for NAACP.

Featured in 2013 Super Lawyer magazine with article entitled “Q&A: From Bailiff to Bar