Dog Leash Laws: How Do They Work With Indiana’s Dog Bite Law? 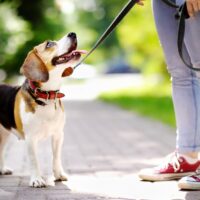 Each state has its own rules concerning when dog owners are liable for biting other people. Indiana law offers some leeway to pet owners but is still willing to hold them liable when they should have known better. Indiana’s various leash laws may also come into play. Read on to learn how Indiana’s dog bite law interacts with the leash laws, and reach out to an Indianapolis personal injury lawyer if you or a loved one has been attacked by a domesticated animal in Indiana.

Indiana has no statewide leash law. Town, city, and county governments have the power to enact their own dog leash regulations. The majority of municipalities require dogs to be kept on a leash under most circumstances, whether on private property or in a public place. Many have exceptions, such as when located in a designated leash-free park.

For example, the Indianapolis Code provides that an owner violates the Code if their animal is “at large” in the city. At large means that the animal is loose and free-roaming, not held by a leash and under the control of a competent person, or otherwise not being confined to a pen, yard, vehicle, etc.

Indiana’s “One Bite” Rule and Negligence

If you are bitten by someone else’s dog in Indiana, you can sue for damages including medical bills, lost wages, and pain and suffering. Indiana courts, however, typically hold dog owners to a “one bite” rule. That means that a dog owner cannot typically be held liable for a dog bite unless the owner knows, or should have known, that the dog was likely to bite or act aggressively. A plaintiff may be able to satisfy the requirement by showing that the dog had bitten someone in the past, or that the owner knew the dog had a history of acting aggressively toward other people.

A dog owner who knows that their dog is aggressive must take reasonable steps to prevent the dog from attacking other people. If an owner fails to take appropriate precautions and their dog bites someone, then they are liable for the damages caused. Municipal leash laws would come into play under this portion of the analysis. If a known aggressive dog is let off its leash and bites someone in a public place, for example, the fact that dogs must be kept on leashes under local regulations would be a strong argument in favor of the defendant’s negligence.

Note that the one-bite rule does not apply if the victim is a postal worker, police officer, or other law enforcement officer. If a dog, without provocation, bites a post office worker or law enforcement officer on public property or wherever the officer is required to be based on their duties, the owner is strictly liable for any damages.

Under certain circumstances, a dog owner may be criminally liable for an attack. A dog owner can be charged with a Class C misdemeanor, punishable by up to 60 days in jail and a $500 fine, when:

Advice and Representation for Your Indianapolis Dog Bite Injury Claim

If you or someone you love has been bitten by a dog or attacked by an animal in Indiana, contact the knowledgeable and effective Indianapolis personal injury lawyers at Lee Cossell & Crowley for a free consultation on your case at 316-631-5151