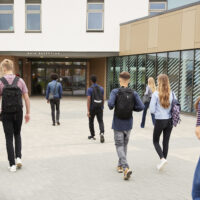 Not every personal injury claim is clear-cut. In the easy case, a person is hit by a car and sues the driver. More difficult cases arise where someone is injured and another person may be indirectly responsible for the injury because of their failure to act responsibly in accordance with their duties. If your dog bites someone, you may be liable for the injury even though you did not directly cause the injury. Or, a parent of a child who is hurt at school may have a claim against the school based on a teacher’s negligence if a responsible, reasonable teacher would have and should have prevented the injury under the given circumstances. These are called “failure to supervise” claims. The Indiana Supreme Court recently addressed how such claims may apply against governmental entities like schools. Read on for a discussion of the case, and contact a dedicated Indianapolis personal injury lawyer if you’ve been hurt due to the negligence of another.

In a typical personal injury case in Indiana, the Comparative Fault Act applies. Comparative fault establishes that a claimant who is partially at fault for an accident can still recover compensation, but their recovery will be diminished by their percentage of fault. If a driver was texting while driving and was then t-boned by a drunk driver running a stop sign, the court may find that the drunk driver was 80% responsible for the accident but the texting driver was 20% responsible as well due to distracted driving. The court or jury would assess the total damages suffered (medical bills, lost wages, etc.), and then subtract 20% from that total. The remaining 80% would be the damages award.

The matter of Murray v. Indianapolis Public Schools turned in part on Indiana’s comparative and contributory fault doctrines. The case involved a 16-year-old who left school grounds without permission and was subsequently shot and killed. The student’s estate sued the school, claiming it was negligent in its failure to monitor and supervise the decedent. The school argued that the student was contributorily negligent and thus the school should have zero liability.

Contributory fault, unlike comparative fault, holds that a plaintiff cannot recover if they were even a little responsible for their own injuries. In the texting-while-driving example above, if contributory fault applied, the injured driver would recover nothing.

The Indiana Supreme Court emphasized that the Comparative Fault Act does not apply in cases against governmental entities. Instead, contributory negligence applies. According to the Court, children over the age of 14 are expected to exercise reasonable care as would an ordinary adult in similar circumstances. If a person’s behavior falls below the standard we would expect from a reasonable person in the circumstances, that person is negligent.

In this case, the student left the school either to engage in a firearms deal or to purchase marijuana. Moreover, there was evidence he had committed a robbery the night before. Leaving school to commit a criminal act is not a reasonable action to perform, and it involves putting yourself in a known dangerous situation. As such, the student was at least somewhat negligent. Regardless of whether the school was also negligent in allowing the student to leave, the student’s contributory negligence negated any claim for recovery against the school.

If you or someone you love has been hurt as a result of someone else’s negligence in Indiana, contact the compassionate and professional Indianapolis personal injury lawyers at Lee Cossell & Crowley for a free consultation on your case at 316-631-5151.