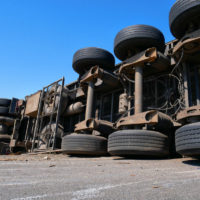 A devastating local accident that took the lives of three people has now resulted in criminal charges against the driver who caused the collision. A Missouri truck driver with a long history of traffic citations has been charged with reckless homicide and at last report was being held on $100,000 bond in an Indianapolis jail. Learn more about the crash below, and contact a seasoned Indianapolis truck accident lawyer if you’ve been hurt in a crash with an 18-wheeler or other big rig or commercial vehicle.

The recent accident occurred on Sunday, July 14, 2019. Bruce Pollard, 57, was driving east on I-465 through a construction zone on the north side of Indianapolis near Keystone Avenue. The traffic ahead of Pollard had slowed to a crawl due to the ongoing construction, even slower than the reduced speed limit of 45 mph that had been posted for the section of highway under construction. According to witnesses of the crash, Pollard was driving fast, changed lanes, and failed to brake in the moments before the crash. Pollard’s semi-truck struck six different vehicles before coming to a stop, the first of which was a Ford Fusion carrying a 29-year-old mother and her 18-month-old twins. The car was immediately engulfed in flames and all three occupants were killed. Seven other people were taken to local hospitals, including one in critical condition.

When emergency responders spoke to Pollard, he offered information about the moments leading to the crash which were later disproved. Pollard had said he was traveling at about 35 mph before hitting the other cars, but his truck’s computer showed that he was going 65 mph. He told police that he had reached over to grab his iced tea and, by the time he looked up, discovered too late that traffic had stopped. He claimed that the reason he didn’t brake before impact was that his brakes suddenly stopped working. Pollard was arrested and charged with three counts of reckless homicide and one count of reckless driving in a work zone, but more charges may be added based on the injuries suffered by the other victims in the crash.

Subsequent investigations showed that Pollard’s driving record is far from perfect. In 2017, he was arrested for making false statements on a medical examiner’s report used to grant his commercial driver’s license. He was also cited for following too closely in 2018, as well as for failing to maintain a safe brake system in his truck. Trucking companies have a duty to ensure that the drivers they hire are capable, responsible, and safe while behind the wheel of their massive commercial trucks. When evidence exists that a driver had a history of unsafe driving, but the carrier company did nothing to rehabilitate the driver or take the driver off the road, the company may become liable not only for accidents caused by its employee, but also for a claim of negligent hiring and supervision. An experienced Indiana truck accident lawyer can help truck accident victims determine their rights after a crash.

If you or someone you love has been hurt in a commercial truck accident in Indiana, contact the compassionate and professional Indianapolis truck crash lawyers at Lee Cossell & Crowley for a free consultation on your case at 316-631-5151.