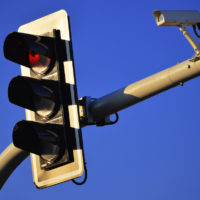 Red light cameras are not permitted in Indiana, but once you drive across the border into Illinois, you’ll find them. Many drivers resent the automated red-light enforcement mechanisms, but studies have shown time and again that red light cameras increase driver safety and save lives. A recent study conducted by the Insurance Institute for Highway Safety (IIHS) found that, not only do red light cameras prevent fatal accidents at intersections, but when the lights are removed, fatality rates jump markedly.

In 2014 alone, 126,000 people were injured and 709 were killed as a result of red-light-running accidents. Most of those who are hurt in these crashes aren’t the drivers who ran a red light; rather, they’re the pedestrian, bicyclist, or driver in the car that entered the intersection when their light turned green. Studies have long shown that red light cameras are effective in discouraging drivers from running red lights, and are generally supported by members of communities where they’re active. Nevertheless, a vocal minority opposes the cameras, and red light cameras have been deactivated in numerous cities across the country. While 533 communities had active red light cameras in 2012, only 467 had active cameras in 2015.

If you or someone you love has been injured in a crash with a reckless or negligent driver in Indiana, contact the skilled, compassionate, and trial-ready Indianapolis personal injury law firm Lee & Fairman for a consultation on your case, at 317-631-5151.

By Lee Cossell & Crowley, LLP | Posted on September 30, 2016
We Focus on the Following Areas
Recent Blog Posts
How to Proceed Following a Truck Accident