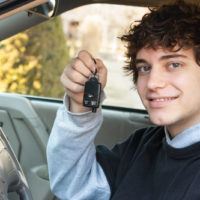 When teens are home for the summer, they have more free time to spend honing their driving skills. Unfortunately, this means that the number of teen deaths on the road soars as well. Learn about some of the causes of teen driving accidents and what you can do to prevent them below.

Starting with Memorial day, the “100 Deadliest Days” mark the period of the year when more teens are killed in motor vehicle accidents than at any other time. According to AAA Foundation for Traffic Safety, the average number of deaths from car accidents where teens between 16 and 19 are involved increases by 16% during these 100 days, and an average of 10 people die each day in a crash that involves a teen driver. In order to prevent your teenager from becoming a statistic, consider implementing the following rules to protect your teen from harm.

Re-emphasize the dangers of cell phone use behind the wheel

Illinois has banned texting on the road for all drivers, but teens may be the drivers who are most likely to cave to the temptation of a buzzing phone while behind the wheel. According to research conducted by the AAA analyzing in-car dash camera footage taken prior to an accident, 12% of all crashes were preceded by the teen operating a cell phone in some manner. Not only should you make sure they understand the dangers of using their phone to send texts or emails; consider making it against the rules of the car to change their music or GPS other than while the car is parked.

The chances that a teen driver will be killed in a crash rise greatly after sundown. 16% of all road fatalities for teens between the ages of 15 and 19 occur between 9pm and midnight, and the chances that a 16 or 17-year-old will be killed in a wreck at night are triple what they are during the day. Indiana limits nighttime driving for the first six months or until the licensed driver turns 18, and you as a parent can help to enforce (and possibly extend) these restrictions to keep your kids safe.

Teens can be distracted by all manner of stimuli while behind the wheel; texting and eating while behind the wheel have both been linked to accidents, but the distraction most often linked to accidents is that presented by having a friend in the car. The AAA’s research on teen crashes conducted by analyzing dash cam footage showed that 15% of all accidents were preceded by a distraction posed by a passenger. Illinois bars drivers who have had their license fewer than 6 months from riding with passengers, and extending that bar on passengers, or limiting the presence of friends in the car when an adult isn’t also present, could save your teen’s life.

If you or your child has been injured in an accident with an irresponsible driver in Indiana, find seasoned and dedicated legal help to assist you in making a legal claim for damages, including compensation for medical bills, lost wages, and pain and suffering, and contact the Indianapolis personal injury attorneys at Lee & Fairman for a consultation, at 317-631-5151.