Use Caution to Avoid Intersection Accidents 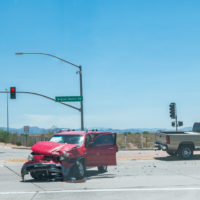 You may not realize it, but traveling through intersections is one of the most dangerous parts of any drive you take. There are steps that all careful drivers should take to avoid accidents in intersections. Read on to learn more about intersection crashes, and how to avoid them.

Intersection accidents among the most common

While intersections occupy a relatively small percentage of all roadway area, they are the site of a disproportionate share of all motor vehicle accidents. A study of accident data by the National Highway Traffic Safety Administration determined that nearly 40% of all accidents occurred in or near intersections, making them the second-most common form of motor vehicle accident behind rear-end collisions.

The NHTSA pinpointed several of the most-commonly cited causes of intersection accidents, including:

Stay safe when traveling through intersections

Preventing intersection crashes requires drivers to employ a high degree of attention and caution. Drivers should avoid making assumptions about how another driver will react to a yellow or red light if the possibility that the assumption was incorrect could cause a crash. Drivers waiting at a red light should also resist accelerating through the intersection immediately after a light turns green, so as to avoid colliding with any straggling red-light-running cars traveling in the opposite direction. Additionally, drivers should refrain from changing lanes in an intersection or immediately before or after, and always check blind spots for pedestrians, bikers, or cyclists before making a turn.

If you’ve been hurt in a collision in an intersection in Indiana, find out if you have a claim for money damages by consulting with one of the dedicated and effective Indianapolis personal injury lawyers at Lee, Cossell & Crowley for a consultation, at 317-631-5151.

By Lee Cossell & Crowley, LLP | Posted on August 31, 2017
We Focus on the Following Areas
Recent Blog Posts
How to Proceed Following a Truck Accident