What Drivers Should Know about Side-Impact Crashes 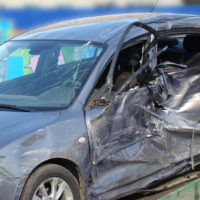 Last month, we discussed the dangers of intersection accidents and ways to avoid them. Now, we’ll explain a bit more about one of the most common types of collision to occur at an intersection: the side-impact collision. These crashes can have devastating effects on victims and are typically avoidable with attentive, responsible driving habits. Read on to learn more about side-impact crashes, and contact an Indiana personal injury attorney for more information if you have been injured by another’s negligent or inattentive driving.

Any accident that involves one car being struck on its side is considered a side-impact crash, but these types of crashes can be divided into two main categories. Lateral-impact or side-swipe collisions occur when two vehicles scrape or strike each other’s side panel. T-bone or broadside collisions occur when the vehicles collide in such a way that they form a T shape, with one car colliding head-on with the side panel of another vehicle. Broadside collisions often result in multi-car crashes, where the impacting vehicle sends the impacted vehicle spinning into other lanes of traffic and oncoming cars. T-bone and broadside collisions occur most often when cars are traveling at 90˚ angles to one another, such as in intersections and parking lots.

Side-impact crashes can have a devastating impact on victims. Twenty-five percent of all fatal injuries received from motor vehicle accidents, and 33% of those suffered by children, occur as the result of side-impact collisions. While fatality and injury rates from head-on and rear-end crashes have improved, injuries from side-impact crashes have remained static. This is due in large part to the fact that, while safety improvements have been made that have improved the impact-absorbing abilities of the front and rear end of many cars, these improvements haven’t been made to cars’ side panels. Additionally, larger vehicles that broadside smaller, lower vehicles are likely to hit the window rather than the sturdier metal portion of the door. This leaves little protection for those riding in the broadsided vehicle.

Side-impact crashes at intersections are often made worse by at-fault cars traveling at high rates of speed. When a dangerous driver sees their signal turn yellow, they might accelerate to try and make it through the intersection anyhow. Should they realize too late that they won’t make it and that cars have begun to travel through the intersection, they may not have enough time to come to a stop before hitting (or being hit by) cars with the right of way.

If you’ve been injured in an accident in Indiana, contact the experienced and compassionate Indianapolis personal injury attorneys at Lee Cossell & Crowley for a no-cost consultation, at 317-631-5151.

By Lee Cossell & Crowley, LLP | Posted on September 19, 2017
We Focus on the Following Areas
Recent Blog Posts
How to Proceed Following a Truck Accident